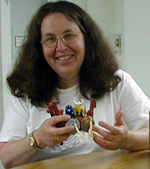 University of Missouri Kemper Scholar Dr. Lois Huneycutt presents a lecture on “The Religion of the Astronauts” about astronauts and their views on religion before and after being “up there.” The lecture is part of a series of “Hot Button Thursdays” lectures at Carpe Diem in Columbia. The series includes “lectures, talks and discussions on themes that may vary from curious to polemic; from funny to inconvenient.”

Huneycutt is an associate professor of history at University of Missouri.

Free and open to the public. Space is limited. RSVP by sending an e-mail to info@carpediemcolumbia.com requesting number of seats. For more information, see www.CarpeDiemColumbia.com.

“Religion. Healthcare Policy. Do the Twain Meet? How religion may affect healthcare policy: some history and an example,” a lecture by  Sister Rosemary Flanigan, Ph.D.

What does it mean to have a “religious consciousness” and how does having such a consciousness affect our thinking as we deal with life and death issues as well as a host of bioethical issues facing us today?
Sister Rosemary will explore a case in which a moral theologian faced a bioethical issue and, using his religious consciousness, proposed a policy to guide medical practitioners.
July 8, 2009 — 5:30 to 6:00 Reception — 6:00 to 7:00 Lecture and Discussion
Kauffman Foundation
4801 Rockhill Road
Kansas City, MO 64110
The lecture is free but registration is required. Register online at www.PracticalBioethics.org or with Donna Blackwood at dblackwood@PracticalBioethics.org or 816-979-1352.
Audio and video versions of the lecture will be available shortly after the lecture. To learn more about audio and video availability, contact Lorell LaBoube at llaboube@practicalbioethics.org.
For a preview of Sister Rosemary’s remarks, listen to the Center’s podcast, The Bioethics Channel, by clicking on:
http://media.libsyn.com/media/medicalchannelsonline/Rosemary.062409.mp3

Marc Adams shares his insights and reporting on his travels around the country helping LGBT youth in their struggle for acceptance.

Adams is the author of the critically acclaimed 1996 book, “The Preacher’s Son,” in which he shares his life experiences from age 3 to 23, chronicling his experiences growing up gay and his journey to self-acceptance.

(Announcement provided by the City of Columbia Campaign for Human Rights).

The eight-week program teaches skills for responding to the stresses of life with skill and creativity. Classes include instruction in formal mindfulness practices (sitting meditation, body scan, mindful yoga and walking meditation) and information about stress, communication and wellness.

Participants are asked to engage in group discussions in class and daily practice exercises outside of class that support applying awareness, skill and compassion to all aspects of work and personal life. Regular class attendance and a commitment of approximately 30-45 minutes of practice per day for the duration of the course are required.

Cost of $40 includes three CDs and a training manual ($20 to be refunded if you attend seven of the eight classes). Adult family members are also invited to attend.

An orientation session is required to enroll in the class. A full-day retreat on July 18, 2009, is part of the class.

Space is limited. For more information or to register for the orientation meeting, please contact Lynn Rossy at RossyL@umsystem.edu.

Dr. Apostolos-Cappadona is the author of numerous monographs and other works including the Encyclopedia of Women in Religious Art (1996); Dictionary of Christian Art (1994); The Spirit and the Vision: The Influence of Christian Romanticism on the Development of 19th-century American Art (1995) etc. She is currently preparing two anthologies, Sources and Documents in the History of Christian Art, and Sources and Documents on 19th-century Religious Art in America; and with Lucinda Ebersole, a collected volume, The Legacy of Eve in Western Art and Culture; several monographs including Christianity and the Visual Arts in the Global Perspective (2009); The Magdalene’s Code: A Visual Guide, and A Companion Guide to Christian Art. She also serves as the Area Editor for the Cultural Reception of the Arts for Encyclopedia of the Bible, to be published in 30 volumes and online by Walter De Gruyter, Berlin (2006-2018).

One of the most outspoken scholars on the controversial subjects of Dan Brown’s novels, Dr. Apostolos-Cappadona was interviewed for the documentary movie Secrets of the Code, as well as a variety of television programs including CNN, the Today Show, A & E “MovieReal: The Da Vinci Code,” Secrets of Angels, Demons, & Masons, and Secrets of Mary Magdalene. She has recently taped another program for the History Channel on the upcoming movie version of Angels and Demons.

Dr. Baum is actively involved in the Ford Foundations Difficult Dialogues Initiatives, in which one of his roles is to provide a basic understanding of Islam and issues confronting Muslim students at the University of Missouri. He is the author of Shrines of the Slave Trade: Diola Religion and Society in Precolonial Senegambia (1999), and has written the “Indigenous Religions” chapter for Concise Introduction to World Religions. He has conducted research in Senegal, Egypt, Morocco, Uganda, Gambia, South Africa, and Zimbabwe.

Dr. Schwain’s most recent publications include Signs of Grace: Religion and American Art in the Gilded Age (2008) and “F. Holland Day’s The Seven Last Words of Christ and the Religious Roots of American Modernism,” in American Art (Spring 2005). She explores conflicts and issues generated by cultural encounters, mass consumption, the politics of representation, and the visual culture of American religions (among others) through close analysis of fine art, material artifacts, and popular culture in the nineteenth and twentieth centuries.

Kathy Gaca
Associate Professor of Classics, Vanderbilt University
Topic: Antipathy toward pagan goddesses by the early church; supplantation with the cult of the Virgin

Dr. Gaca’s publications include The Making of Fornication: Eros, Ethics, and Political Reform in Greek Philosophy and Early Christianity (2004); “Early Christian Antipathy toward the Greek ‘Women Gods’,” in Finding Persephone: Women’s Rituals in the Ancient Mediterranean (2007); and “Girls, Women, and the Significance of Sexual Violence in Ancient Warfare,” in Sexual Violence in Conflict Zones (forthcoming 2009). Gaca’s research interests include Greek and Roman philosophy, and socially normative ideas in the Greek biblical traditions.

Dr. Winstead is author of numerous publications including Virgin Martyrs: Legends of Sainthood in Late Medieval England (1997); “Saint Katherine’s Hair” in St Katherine of Alexandria: Texts and Contexts in Western Medieval Europe (2003); and “Fear in Late-Medieval Martyr Legends” in More than a Memory: The Discourse of Martyrdom and the Construction of Religious Identity in the History of Christianity (2005). Her research focuses on saints’ legends, one of the most popular literary forms of the Middle Ages, and on fifteenth-century English literature and culture. She is interested in the intersection of literature and the visual arts, how medieval authors treat issues such as orthodoxy, dissent, class conflict, and gender, and how medieval audiences responded to art and literature.

Dr. Futrell’s research is guided by her interest in the symbols and rituals of power in the Roman Empire, with particular focus on the deployment of gender and material culture in imperial politics. She is also intrigued by representations of ancient Rome in the modern world, in film, literature, and art. Her publications include Blood in the Arena: The Spectacle of Roman Power (1997); The Roman Games: A Sourcebook (2006); and Barbarian Queens: Paradoxes of Gender, Power and Identity (forthcoming), etc. Futrell has appeared regularly on a number of documentaries for the History Channel and A & E, including “Hannibal,” “The True Story of Gladiators,” “Cleopatra’s World: Alexandria Revealed,” and, most recently, “Boudica: Warrior Queen.”

Loriliai Biernacki’s research focuses on Indian religions, with an emphasis on Tantra, as well as gender, critical theory, and ethics. Her most recent publications include The Renowned Goddess of Desire: Women, Sex and Speech in Tantra, Oxford University Press (2007); “Sex Talk and Gender Rites: Women and Tantric Sex” in International Journal of Hindu Studies (August 2006); and “Shree Maa of Kamakkhya” in The Graceful Guru: Hindu Female Gurus in India and the US (2004).

Dr. Fleck is author of “‘To exercise yourself in these things by continued contemplation’: visual and textual literacy in the frescoes at Santa Maria Donna Regina” in The Church of Santa Maria Donna Regina: Art, Iconography and Patronage in Fourteenth-Century Naples (2004) and “When a Bible is not a Bible: the meaning and movement of the Bible of Anti-Pope Clement VII” in Word and Image (July-September 2006), and she is a volume editor of Masterpieces of Italian Painting, The Walters Art Museum (2005). Her research interests encompass a number of areas of medieval art history, with a concentration on European and Islamic art of the Mediterranean.

Dr. Schuchardt’s works include The Disappearance of Women: Technology, Pornography, and the Obsolescence of Gender (2008) and You Do Not Talk about Fight Club: I Am Jack’s Completely Unauthorized Essay Collection (2008), and he is a contributor to Mirror On America: Short Essays and Images from Popular Culture (1999, 2002, 2005). Dr. Schuchardt is the cofounder of Cleave: The Counter Agency, a content development company and communications think tank, and cofounder and publisher of Metaphilm, a website that
provides a venue for the review and interpretation of cinema.

May 18, 2009 – A workshop to train religious groups about addressing teen relationship violence will be held Aug. 22, 2009, in Columbia.

A faith-based initiative against teen relationship violence, the Teen Relationship Education and Empowerment (TREE) program was founded with a Missouri Foundation for Health grant to a coalition of local churches, community health professionals and MU.

Columbia’s Broadway Christian Church submitted the grant, with assistance from the MU Center on Religion & the Professions, which provides project development, outreach and administrative support.

Groups interested in building a TREE team should contact Kim Ryan at (573) 489-2729 or kkgryan@juno.com or Kendra Yoder at klyd29@mizzou.edu.

The MU Black Culture Center, in partnership with the City of Columbia’s Commission on Human Rights, offers a cultural awareness training to Columbia residents.
Yan-Koloba is a social, educational and multicultural teambuilding and character-building activity rooted in the cultures of Africa. A brief intermission will feature authentic African cuisine. Space is limited to the first 30 participants.

RSVP to Nathan Stephens at stephensna@missouri.edu.

The City of Columbia Human Rights Commission and the Columbia/Boone County Department of Public
Health & Human Services will host a screening of the documentary film “Fall from Grace” followed by a panel
discussion about the history, message and tactics of the Westboro Baptist Church. Also, learn about the City
of Columbia’s domestic partnership registry and Columbia’s human rights ordinance, which covers sexual
orientation as a protected class.

Refreshments will be served.

Dr. Joanna Hearne will be the last presenter of the Diversity In Action: Bridging Research and Practice brown bag series.  This series of research-based presentations is designed to inform scholars, students, and practitioners of diversity-related research at Mizzou.

This presentation explores scenes of Native American spectatorship and film reception in films by contemporary Native film directors and producers.  The films situate indigenous viewers as contemporary producers and consumers of visual media and suggest ways that politicized forms of viewing can re-signify Western-genre and documentary images of anonymous and stereotyped Indian characters.

Iraqi composer and Oud master, Rahim Alhaj, returns to mid-Missouri five years after his first benefit concert for Iraqi children.
Alhaj is an Iraqi from Baghdad currently living in Albuquerque, N.M. His Oud music has been played on PRI’s The World and BBC Radio. He has performed hundreds of concerts all over the world. Rahim was the winner of several music awards and was a Grammy Award nominee for the 2008 Best Traditional World Music Album. Y