June 17, 2009 – “Religious Literacy for the Public and Professions,” a new online course offered through MU Direct: Continuing and Distance Education, is under way. The course (REL ST 3100) teaches students to engage and encounter religion in day-to-day life and in the professional workplace. Its primary goal is to examine religious diversity in private and professional contexts from a practical standpoint by examining a variety of case studies. The course is open to University of Missouri students who are absent from campus for the summer or unable to attend day classes and to nontraditional students.

Textbooks for the course include “Religion and the Workplace” by Douglas A. Hicks and “How to Be a Perfect Stranger: The Essential Religious Etiquette Handbook” by Stuart M. Matlins and Arthur J. Magida.

After the course is completed and assessed, a team from the Center on Religion & the Professions (CORP) will author a chapter for a monograph about the project that will be distributed nationally through the Institute on Religion in Curriculum and Culture of Higher Education.

The Center on Religion & the Professions was founded in 2003 with a mission of improving religious literacy among professionals, to help them serve a diverse public. For more information about the Center, contact Director Debra L. Mason at (573) 882-9257 or MasonDL@missouri.edu.

Lia Lee, a young child of Hmong immigrants, has been brought to the emergency room of a California medical clinic. It took several days for the doctors to diagnose the case because the interpreter, a Hmong whose English was poor, was inadequate. The problem was made worse because the parents considered Lia’s illness to be both a threat to her health – hence their trip to the clinic – and a sign that she may be destined to be a shaman. The doctors prescribed a drug regimen. The parents said they understood how to administer the medicine, although they couldn’t understand English or read what was written on the bottles.

Mrs. Albert is 83 years old. She has multiple medical problems that are quite real and that produce chronic, progressive pain and weakness. She is on a number of medications, and she is faithful to the regimen her doctors prescribe. Nevertheless, nothing the doctors do seems to help her. On the other hand, her faith helps her to cope and to maintain independence and the church-related activities that are so important to her. She told her doctors, “Whenever you pray, you get healing from God.”

Mrs. Albert’s doctor is impressed by his patient’s fortitude, and he wants to understand better the relation of health to religion. He has read articles by Dr. Harold Koenig of Duke University, so he wrote to Dr. Koenig asking for some advice. Dr. Koenig’s answer regarding chronic pain and prayer has both medical and spiritual elements. Other doctors, however, disagree fundamentally with Dr. Koenig and explain differently the relation of Mrs. Albert’s prayer to her condition.

John’s hometown, like many American municipalities, has enacted an ordinance that prohibits the killing of livestock animals, except by law enforcement officials, veterinary specialists, and licensed meatpackers and butcheries. The stated reasons for such an ordinance relate to public health and sanitation. Violations of the ordinance can result in fines, and in extreme cases, imprisonment.

John’s hometown has a significant Hmong community. Assume that members of that community legally purchased pigs or chickens and sacrificed them in public following the traditional Hmong procedure. None of the Hmong have the required license. Neighbors call the police, who issue a citation for violation of the ordinance. The Hmong explain that they were not aware of the ordinance, and that animal sacrifice is an age-old Hmong custom.

Barbara, prosecuting district attorney, and Juan, the lawyer for the Hmong, are developing the legal arguments for each side, which they will present to the presiding judge. If the Hmong stipulate that they are not licensed and did sacrifice the animals in public, how should the judge rule on their defense that the act is an integral part of the Hmong culture?

Jeff Reynolds has been sent to do a follow-up article on an accident in Cairo, Ill. A school bus approaching a railroad crossing stopped as it must by law. A semi truck did not slow and struck the bus from behind, sending it into the path of an oncoming train. Eleven school children between the ages of six and twelve were killed and fifteen others were injured. The bus driver was also killed. The truck driver was slightly injured, was taken to the hospital, treated and released.

Jeff decided to interview parents of the dead and injured children. Several pairs of parents refused to talk with him; their pain was not a public matter, they said. Mr. and Mrs. Oliver Buckton did agree to speak with Jeff. He went to their home for the interview. Mrs. Buckton showed Jeff a picture of Jenny, aged 8, their beautiful, intelligent, playful daughter, their only child. She wept and continued to speak about her wonderful, dead child. Mr. Buckton remained stolidly silent, arms crossed, eyes down. Jeff turned to him to ask what sustained him during this terrible tragedy? Mr. Buckton looked at his wife and then said that only their faith kept them from going to the truck driver’s house to confront him and perhaps, admitted Mr. Buckton, do him physical harm. He was angry, deeply angry, but he was controlling it and trying to find the strength to forgive the truck driver whom the Bucktons felt was responsible for their Jenny’s death.

“Where do you look for such strength?” Jeff asked.

Mrs. Buckton looked at her husband who said, “In our faith. Jesus forgave his executioners. I wonder if he could have forgiven them if they had killed his daughter?”

Jeff wasn’t sure what to do at this point. He knew that his editor was against any mention of God in the paper and especially against stories that seemed to support any particular faith. Jeff wrote the story of the Buckton’s struggle pretty much as they had told it to him.  The story appeared without any mention of faith, only of the Bucktons’ anger at the truck driver.

The 7-year old son of African immigrants has a chronic disease. Although the condition is serious, it is easily treated with medications and changes in diet. The family frequently misses scheduled appointments. After six months of treatment, the child shows little improvement, and the American doctors have determined that the family is noncompliant. Translators have attempted to bridge the gap between the doctors and the family, with only limited success. The nurses wonder whether a well qualified social worker could help the situation. The hospital administrators are looking for a social worker with the skills and educational background to help improve the situation.

This case utilizes the following four articles. The situation described in the problem is hypothetical.

The journalistic coverage of religion is on the rise as the visibility of religion and spirituality increases in American society, politics and popular culture. The managing editors of the publications that printed the stories listed above have been inundated with reader feedback – both positive and negative. After seeing the volume and passion of the letters, the editors decide they must respond. Each editor asks the ombudsman to evaluate the stories to determine whether the stories were fair. Ultimately the editors want the ombudsmen to write columns on how reporters should cover controversial issues involving religion and diverse religious beliefs and practices with which reporters may be unfamiliar. The ombudsmen will also consider ways for reporters to minimize personal bias in reporting about religion.

Next week, Jack, a school nurse, is planning to check the students in his elementary school for scoliosis and vision, hearing and dental problems. The school has a large number of students who are the children of immigrants from the Middle East, Southeast Asia and Africa. In a recent nursing workshop, Jack heard about transcultural health care. He wants to make sure he provides good care to the students. After the principal sent a note to the students’ parents telling them about these screenings, several parents expressed concern. The concerned parents were from the following traditions: Muslim, Hmong, Sikh and Christian Science.

May 28, 2009 – There are a few days left to enroll in “Religious Literacy for the Public and Professions,” a new online course offered through MU Direct: Continuing and Distance Education. The course (REL ST 3100) teaches students to engage and encounter religion in day-to-day life and in the professional workplace. Its primary goal is to examine religious diversity in private and professional contexts from a practical standpoint by examining a variety of case studies. The course is open to University of Missouri students who are absent from campus for the summer or unable to attend day classes and to nontraditional students.

Five seats remain available for the course, which is offered through the University of Missouri’s Department of Religious Studies. The course was created by the department and the Center on Religion & the Professions at University of Missouri. The instructor is Justin Arft. Students can register up to June 8 for the eight-week class, which runs June 8-July 31. MU summer registration is June 3-5. A late fee is assessed if registering June 5-8.

Textbooks for the course include “Religion and the Workplace” by Douglas A. Hicks and “How to Be a Perfect Stranger: The Essential Religious Etiquette Handbook” by Stuart M. Matlins and Arthur J. Magida.

The Center on Religion & the Professions was founded in 2003 with a mission of improving religious literacy among professionals, to help them serve a diverse public. For more information about the Center, call (573) 882-9257.

May 14, 2009 – National Public Radio affiliate KBIA interviewed Debra L. Mason, director of the Center on Religion & the Professions, on May 14 for a story about Westboro Baptist Church, which planned a protest in Columbia. In the wide-ranging interview, Mason addressed questions about whether the media should cover the group – known for its position against homosexuality and protesting at soldiers’ funerals – how they are related to other Baptists and whether they could be classified as a cult. 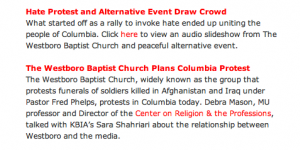 See more about the interview here.

In addition to directing the Center, Mason is executive director of the Religion Newswriters Association and is a professor of journalism studies at the University of Missouri School of Journalism. She is a nationally recognized, award-winning and widely published specialist in religion journalism and has more than 25 years of professional reporting, research and teaching experience.

The Center on Religion & the Professions (CORP) aims to improve religious literacy among professionals, to help them serve a diverse public. It performs research and creates curriculum, resources and public programming to accomplish that goal. For more information about the Center, call (573) 882-9257.